“Phantasmagoria” begins as Marcus enters a strange hotel in order to investigate paranormal activity.  The level involves Marcus facing the darkness with only a stun gun to protect him.  Worse than the Locust that i﻿nfest it is a ghost from Marcus’s past changing the hotel into an otherworldly illusion.  Additionally, Marcus must use a flashlight to illuminate the darkest depths of the hotel.  In “Phantasmagoria”, the player can take nothing for granted.

Dual Worlds: Inspired by Silent Hill, included two versions of the hotel with transition sequences facilitated by the ghost haunting Marcus.  While the visuals are distinct, the layout is nearly identical.

Mood Creation: Set up the environment to capture an eerie and spooky mood that foreshadows the horror that awaits.  Also paced the level accordingly to engineer the player experience.

Systems Design: Overhauled Gears of War combat by removing the ability for Marcus's gun to be fatal and instead gave it a stun function.  Also scripted a system to allow for custom interactions in the world.

For "Phantasmagoria", I created two versions of the hotel.  One of them is built in a haunting-yet-beautiful style that focuses on creating an eerie and unnerving atmosphere.  The other is far from subtle with metal grating and molten emulsion that focuses on creating immediate tension and danger.  To compliment this dichotomy, the more threatening enemies, Berserkers and Boomers, are exclusive to the otherworld hotel while the easier Drone enemies are limited to the normal hotel.

Psychological Horror heavily relies on a haunting yet thoughtful mood to propel the player into questioning what is going on. The player has to be presented with a scenario that is familiar enough to understand and strange enough to be intriguing.  One of the major techniques "Phantasmagoria" uses to create this mood is by taking Marcus's skeletal mesh and placing a gore material on it,  instantly creating a ghastly figure that looks familiar enough to be unnerving.

Pacing, important in any level, is especially important in psychological horror levels.  There are times where the player ought to let their curiosity guide them and other times where they should flee for their lives.  Here, the otherworld hotel signals danger, which is provided by a Berserker trailing the player.  Because the pacing is out of the player's control, he has a high level of respect of the level while playing.

The final technique used to engineer the mood is to force the player to find a flashlight.  By requiring the player to face the darkness in order to see it, the overall tension is increased in addition to the sense of exploration.  To reinforce the importance of the flashlight, the level darkens considerably shortly after the player finds it.

In order to transform Gears of War into an unnerving and tense experience, the strength of the player needed to be stripped away.  Thus, the player's ability to kill enemies is removed in lieu of a stun gun, which had to be scripted as there was no equivalent in Gears of War.  There were numerous unexpected difficulties with this and the level's overall design had to be changed in accordance.
Scripting details Here

Since story is such an important part of the level, it was crucial to make sure it was correctly presented.  At first, the player would approach trigger volumes and involuntarily lose control and be forced to read some text until it went away.  I replaced this system was one where the player would press a button to interact with objects after being prompted to do so.  This made players who enjoy story feel better about discovering it while allowing those who do not interested to skip it.  Additionally, when Marcus is in range to interact with an object, he turns his head towards it.
scripting details here 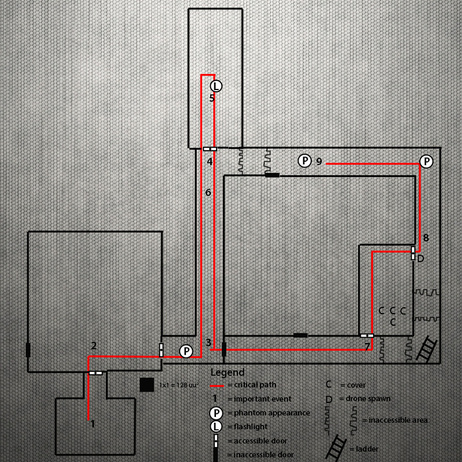 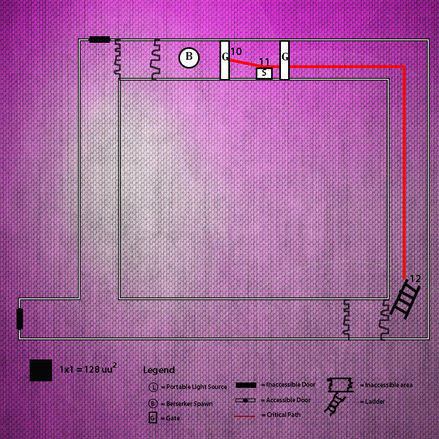 10) The player arrives at the otherworld hotel and sees a raging berserker in a gate past him.  However another gate behind the player prevents him from leaving.
11) The player flips a switch that opens both gates, prompting the first berserker chase of the level.
12) Running down the corridors, the player quickly climbs up a ladder to the second floor, escaping the berserker below, but encountering another one that charges at him, triggering the transition back to the normal hotel. 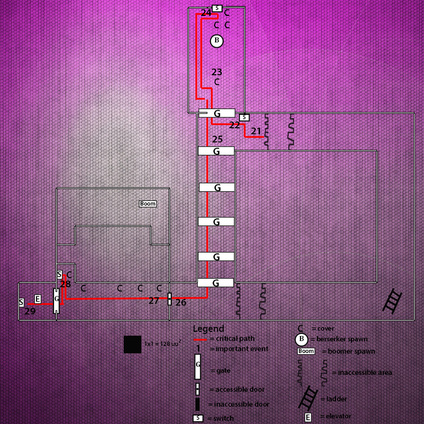 21) The player arrives in the otherworld hotel again.
22) The player sees that a corridor is blocked by a series of metal gates with an empty room in front of him blocked by a different one.  He hits a switch and opens the gate to the room.
23) After entering the room, the gate slams shut behind him and while the player turned around, a berserker appears in front of him.
24) The player weaves past the berserker to hit a switch that allows him to escape the room.
25) As the player runs past the berserker, the gates in the corridor open one by one allowing him forward.
26) The player kicks down a door leading to the otherworld foyer, escaping the berserker.
27) The player is greeted by a boomer as he enters the foyer and takes cover behind the thick metallic railings.
28) The players hops from cover to cover and hits a switch that opens the elevator doors.
29) The player activates the elevator which begins to take him down, escaping the boomer. 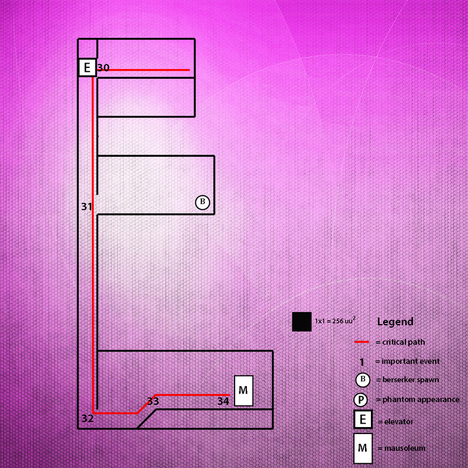 What Went Well
Clear vision:  With clear player experience goals, I easily made decisions that brought the level closer to completion.
Design flexibility: I was able to change my design based on the engine while maintaining the overall vision.  I had to replace wretches with drones because of how my scripted stun gun worked.
Scripting: I was able to script out new systems and normal/otherworld hotel transitions quickly and iterated on it.  I also kept my kismet clean and organized it vertically based on its location in the level to make it easy to debug.

What Went Wrong
Unclear story:  In pre-production, I knew I wanted a personal story involving Marcus dealing with his darker side, but I didn't solidify it which confused players.  Once I included Gears lore into its story, the level made sense to players.
Overscope:  I originally planned for more gamespace in my LDD than I ended up implementing.  I wasted time whiteboxing parts of the level I eventually threw out.  This time could have been better spent polishing other areas.
Unfamiliarity with Gears assets:  I didn't have a complete understanding of existing Gears assets before committing to the project which forced me to be very creative with how I used assets.

What I Learned
How to get a player emotionally invested: Getting players into the story and empathizing with Marcus is difficult.  Making players second-guess and question what is going on is equally challenging.  It’s one thing to have the player concerned over their safety, but it’s quite another to make them worry about their morality.
Quality lighting takes time and iteration: The time spent for a basic lighting pass is much less than a final quality one.  Between waiting for high-quality builds and getting other opinions on the lighting, it took a long time to get the lighting to where it needed to be.  I learned to leave room for how long this process takes.
Stories need a through-line: Symbolism adds depth to a story, but if there isn't a simple take away message, then players won't get it.  Before adding Gears lore into the story, players only understood that the phantom was creepy.  After, players got that he was a soldier that Marcus abandoned and left to die.